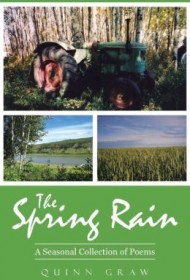 The Spring Rain: A Seasonal Collection of Poems by Quinn Graw is organized into four sections: “Faith in God,” “Family and Friends,” “Odds and Ends of Poetic Rhyme,” and “Seasonal Poems.” Graw lives in Alberta, Canada, where he grew up, and these poems are drawn from “the beginning of his writings in the 1990’s.”

The book tackles a range of topics, including social and ecological plights, with mixed success. The poem “The Leaf,” for example, criticizes the owning class for its materialism and greed: “Fancy cars, gadgets and houses. / Money, money and more of that. That’s what they worship in their holy vault…” While these lines have a specific tone of contempt that is compelling, they don’t rise above run-of-the-mill criticism to bring readers into a complex imaginative space.

Graw’s language is descriptive through his use of adjectives, but ultimately, he does not offer the fresh combinations that would distinguish his pieces. For instance, he writes, “[i]n a black era I was the dull foghorn of life.” While the modifiers “black” and “dull” show admirable writerly intent, they are respectively melodramatic (the word “era” when relating to one’s own life can sound pompous) and redundant (the sound of a foghorn is inherently dull, as opposed to sharp).

Two other aspects hinder the book: All the poems are centered on the page, which indicates a default, an attempt to rely on symmetry alone instead of deliberate line breaks to create complex rhythmic drama, and the end rhymes are often predictable and uninteresting, utilizing common monosyllabic words, such as “wife/life” “way/day.”

Readers who enjoy poems about the various nuances of the seasons from a northern perspective as well as those who have a somewhat pessimistic view of humanity will be affirmed by this collection. However, the work needs developing to reach a more sophisticated poetry audience.