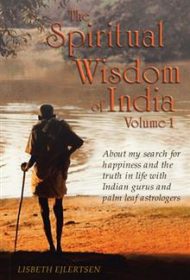 The Spiritual Wisdom of India is the first of two books documenting Danish author Lisbeth Ejlertsen’s more than 20 trips to India over the span of 23 years. Intended for readers interested in Eastern spirituality and culture, the book blends personal experiences with an introduction to Indian philosophy, Hinduism, palm leaf astrology, and the practice of following gurus.

After explaining her desire to seek knowledge in India, Ejlertsen introduces readers to the ancient Indian texts known as the “Vedas” as well as subsequent reflections called the “Upanishads.” She also discusses the history of Hinduism.

The author then delves into the lesser-known practice of palm leaf astrology, including her interactions with both charlatans and authentic practitioners. Particularly unique is her inclusion of a QR code (or, alternatively, a website url) allowing readers to listen to one of her palm leaf sessions. The recording is clear, but the heavy accents can be challenging to decipher.

The book’s remainder, comprising more than half the text, is the author’s detailed account of visiting various gurus, or spiritual teachers, until finding her “master” Chariji and the Sahaj Marg school of meditative practice. Ejlertsen shares her daily practices and discusses the importance of meditation and the “divine state” it can evoke.

Ejlertsen has an engaging way of describing her personal experiences, as when she writes that “the energy of my heart began to vibrate like a song.” Unfortunately, she covers too much ground to offer substance in any single area. For example, she attempts to provide background information and personal anecdotes for five separate gurus, all of whom deserve a broader discussion of their teachings. She also skims the surface of complex topics, such as Indian philosophy and spiritual texts; for example, she condenses the intricate evolution of Hinduism to a mere 16 pages.

As a result, her book’s audience is unclear: Ultimately, it lacks the depth to interest spiritual seekers and the narrative drive to attract general readers of memoirs.