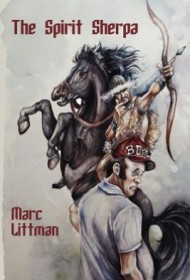 When mean-spirited, sexist, and selfish Manus dies in a car accident — a collision with an ice cream truck that Manus’s own hostility and impatience caused — he is quite surprised by his “after life.” He finds himself in a casino being accosted by a woman who appears to be his grandmother, Oma. She reveals that she is his “spirit sherpa,” and tells him that guiding him through his incarnations for important lessons is part of her own journey toward enlightenment.

Such is the premise of Marc Littman’s The Spirit Sherpa, in which Manus leaps around time, in and out of his multiple lives, and even meets his “three wise men” — Elvis, Wilt Chamberlain, and Einstein. Along the way, he confronts and is confronted by his estranged wife, his two teenaged children, his deceased parents, and Singh, the driver of the ice cream truck, who was also killed.

Manus encounters all the important people of his life over and over in many incarnations. Sometimes he’s male, sometimes he’s female, and the same is true of the other characters. The story demonstrates the belief that each life is another lesson learned, and that we continue to play out our issues with the same people, though they may be cast in different roles during each lifetime, and that our spirits keep returning until we finally master those lessons.

The freewheeling style is often fun, and the author has a good facility with language: Oma is vividly described as having “a worn leather suitcase face that looked like it had been banged around baggage claim too many times.” Unfortunately, the many shifts in time, place, and character, and the brevity of many of the episodes makes the story confusing and hinders the narrative drive. Ultimately, The Spirit Sherpa is more a demonstration of a spiritual belief than a true novel; a better focused story would have greater potential for reader satisfaction.