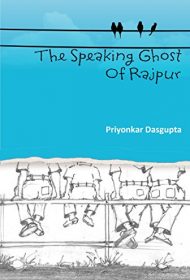 Told in the voice of Shoumo, the youngest of a group of boys in the fictional Indian small town of Rajpur in the 1990s, this novel is filled with haunted mysteries, youthful discoveries, and the inklings of first love. Most of all, it is a profoundly moving portrayal of how young men grow up, explore their world and challenge the accepted order.

Opening in a rundown video parlor to the exhilaration of onscreen slaughter, the narrative describes the boys looking for excitement wherever they can find it. They jump on the roof of a moving bus, search for a mysterious pseudo mystic and are thrilled at the prospect of seeing a friend’s gun. As they make discoveries about themselves and their world, the author subtly introduces elements of mystery that feed the boys’ imaginations and nightmares: rumors of murder and gang wars; strange men with evil expressions who stare at them; railway passengers who are being drugged and robbed.

Although readers may be confused with this jumble of incidents that have little connective tissue, they appear to be the author’s attempt to capture the scattered nature of the typical teenager’s attention span. While largely effective, the approach also feels somewhat overdone. Despite this drawback, the elements cohere when the youths face a momentous situation that will change them forever.

The author’s sure hand and insightful take on characters of different genders, ages, social standing and cultural backgrounds gives a clear-eyed picture of modern India and of young boys everywhere. A keen sense for the atmospherics (“I looked up at the trees that still dripped with occasional icy drops of rain, their strong branches winding up into the sky as if tired of the mess they were in”) also enhances the reading experience.

Overall, readers will find The Speaking Ghost of Rajpur well worth their time and attention.