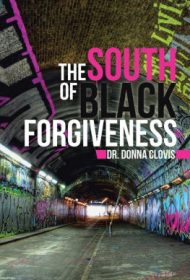 In this brief, highly experimental novel, Donna Clovis delivers a work that’s nominally a mystery but also richly laced with prophetic commentary on race and societal inequities and conflict in America.

Protagonist Tanisha is an African-American investigative reporter for the Columbia Herald, based in Harlem. Soon, she finds herself on the trail of a serial killer whose victims are all black and who leaves notes at the crime scenes that read, “Please Forgive Me.” The story explodes in the public eye when a shooting and bombing at a black Pentecostal church leave dozens mortally wounded, a crime which Tanisha believes was committed by her suspect.

The supporting cast is small, consisting mostly of Tanisha’s editor and a white reporter from another outlet who seems to have a disproportionate interest in his colleague. The chapters are bracingly brief, often just a line or two, but they’re devastating in their brittle but poetic composition: “The next morning, the trees in the park lift their wet red blood tresses of leaves blown up by the wind and shudder in the flash of lightning illuminating black faces walking. The lightning leaves the air with an aroma of ozone in autumn.”

In addition to touching on contemporary topics like President Trump’s racism, Mark Zuckerberg’s hypocrisy, and the painful history of “blackface” among white Americans, the book dives into issues like lynching and police behavior towards people of color. Given the heightened energy around the Black Lives Matter movement and the rise in America of white supremacist incidents, this is a shockingly prescient novel.

The crime story is as intriguing as the social commentary: Tanisha picks up a creepy stalker, and the villain, while fairly easy to spot, is a terrifying mix of obsession, psychosis and delusional transference straight out of a Thomas Harris novel.

Even those who aren’t mystery fans will find this an eminently readable piece of social fiction with many painful and important messages for all.