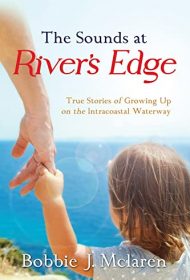 Bobbie J. Mclaren takes readers on a nostalgic journey of childhood memories in this collection of short vignettes.

Raised in north Palm Beach Florida in the village of Juno during post-war America’s simpler times (1950s to 60s), Mclaren weaves colorful tales of youthful escapades alongside the waterway, her backyard and more, and imparts lessons learned from happy and sometimes painful adventures.

Mclaren recalls mischievous shenanigans with neighborhood children, cousins and particularly her older, influential sister Sherry, with whom she shared an intense sibling rivalry. These make for humorous stories. For example, when Sherry gets her own room, Mclaren jealously torments her, taking advantage of Sherry’s crustacean phobia by putting a host of fiddler crabs in her bed and then denying the act.

Mclaren also recounts attempting to parachute off the garage roof, shooting BB’s with a slingshot at her aunt’s windows, and setting her parent’s bedding on fire while playing with a lighter. These forays into dangerous and forbidden territory— then lying about it— brought her father’s ire and punishment.

Each story concludes with a biblical quotation illuminating the anecdote’s sacred lesson. A woman of deep faith today, the author credits youthful missteps and her parents’ stern response as spiritual instruction in God’s grace and love.

These mini-sermons make for an easy read. At times the cutesy humor seems rather forced, clouded by misty-eyed longing for the good old days. A mild but somewhat jarring political rant appears toward book’s end praising Reagan and Bush presidencies and bemoaning the poor work ethic of today’s youth.

In contrast, one beautifully written essay describes childhood journeys aboard a “ship” created by large fallen pines at the river’s edge. The stumps formed what Mclaren imagined as a mighty abandoned vessel that she captained on voyages inspired by the natural beauty of the waterway. Here “the gentle sounds at the river’s edge” still invite her to “travel back one more time to a place of adventures and laughter.”