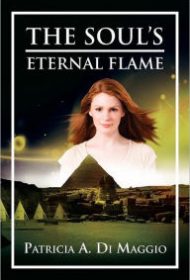 With a romance that defies time, location, and even death, The Soul’s Eternal Flame is an uplifting story of soul mates and their unending love.

Jeri is 56 years old, divorced, and living a quiet life as a school bus driver. Her dogs are her closest companions, even though her two children, Sarah and Adam, live nearby. Her life is peaceful, but she always feels as if she’s missing something, especially romantically.

In a strange twist, Jeri discovers she is aging backwards. She’s getting younger, which has its benefits, but her doctors are unsure of the nature of her condition and believe that her age is reversing so quickly that it will be fatal within four years. This possibility encourages Jeri to pursue her dreams and happiness, and serves as a catalyst for meeting Sean, the love of her life.

The intense whirlwind of Jeri and Sean’s developing romance is the highlight of the story. Their attraction is nearly immediate, and within several months, they are engaged. Sean reveals that he believes they are soul mates and have been a couple in other lifetimes. This spiritual dimension adds depth to their love. As the story unfolds, Jeri takes her time revealing the secret of her medical condition, and the question of whether or not Sean will accept her for who she is further drives the plot.

While the romance provides a strong base for the story, the book struggles with pacing, especially in the second half. The first half flows quickly and enjoyably with the budding romance and engaging questions about Jeri’s health. Unfortunately, without the questions of the initial romance to generate excitement, the second half drags somewhat. However, readers who persevere will be rewarded with an emotional, heartwarming conclusion.

Despite pacing issues, The Soul’s Eternal Flame is a unique romance. It will appeal to readers seeking a love story that exists in our time, but spans the ages.