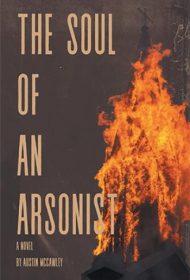 Arsonists are driven to start fires for many reasons. Some do it for monetary gain, some for vengeance. Others want to be gallant heroes, and still others may be suffering from psychological or emotional issues. As Austin McCawley focuses on the motivations of his antagonist in The Soul of An Arsonist, his story will forever change the way you look at the people closest to you.

Duxford is a quiet, affluent suburb adjacent to the city of Woodford. When a church and a synagogue are torched within four days of each other, all evidence points to Danny. His background fits the profile: he’s a tough, young kid, wild and unpredictable, with a psychiatric history and a record of fire setting.

Bill, a psychiatrist, and his wife Nancy, Danny’s adopted parents, believe that someone else is responsible for the mayhem. The community, meanwhile, becomes restless with the police department’s inaction in apprehending the suspect. Dazed and stricken with worry and fear, Bill hopes he can solve the mystery and uncover the identity of the culprit before his adopted son is convicted of a crime he believes he did not commit.

McCawley awakens the inner sleuth in readers as he presents possible culprits that keeps readers guessing. As he provides these red herrings and explores each character’s motives, he touches on themes of unresolved emotional trauma and burdened childhoods. The book’s short chapters, surprising twists and palpable atmosphere of fear and suspicion propel the story forward.

However, the conclusion is highly disappointing, for reasons that would be spoilers to reveal. Suffice it to say that readers will feel cheated when the culprit is revealed.

Until then, however, The Soul of An Arsonist is elegant, suspenseful and manages to tackle complex themes deftly.