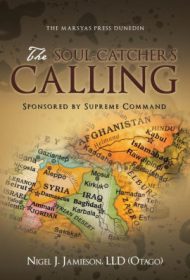 “The whole wide world is in turmoil,” writes Nigel J. Jamieson in The Soul-Catcher’s Calling, a massive, 1,000+ page tome, that offers an antidote to the chaos of the modern world by providing a plea and a plan to save souls from eternal destruction.

Haunted by the chilling specter of the 2019 terrorist attack in Christchurch, New Zealand, the author examines the destructive mindsets and actions of modern-day people. In so doing, he issues a call for humanity to eschew terrorist leanings, earthly pleasures, and mindless distractions and refocus on God. Rooted in Christian tradition, Jamieson’s narrative blends theology with political theory, history, philosophy, and literature to create a work that falls somewhere between a 21st-century parable on the struggles between good and evil and ancient visionary literature.

At the book’s heart is the spiritual tug of war between the Supreme Commander (God) and the Supreme Counterfeiter (the devil). This conflict, Jamieson contends, affects all levels of society, including the decisions of world leaders. While everyday people also contribute to the bedlam of war, hatred, and strife, the prophetic angels seem to most disdain intellectuals, regardless of their political leanings, who attempt “to rewrite their own version of the Bible.”

With its mixture of spiritual exploration and commentary on such diverse topics as Gulliver’s Travelsl, Les Misérables, Stalin’s gulags, and Plato’s philosophy, not to mention its outsized length, this is a daunting work. Though it’s largely well-written, to appreciate the author’s depth of thought, readers will need a love of language and to feel comfortable flying in and out of Jamieson’s stream-of-consciousness style (e.g., “Writing … writing … writing … when so seriously undertaken with all one’s heart and with all one’s mind and with all one’s strength and with all one’s soul, is most certainly a prayer. It is a prayer which, like no other prayer, so deeply bares the soul—in itself the substance of things which, but for remaining unwritten, would also remain unseen. So then, after such prayerful peroration…or merely an icebreaker…let’s pray…”).

The narrative, which often feels like a Blakeian dream experience, can be repetitive (e.g., Book Three’s lengthy discourse on how words have lost their meaning) and could have been significantly trimmed. Also, occasional grammatical and typographical errors require attention.

Still, this is a smart, spiritually probing book. Those who can navigate its heavily intellectual, wide-ranging material will find much to ponder, including what feels like a remarkably prescient nod to the social upheavals of our current time: “What must be broken by way of birthing both a new heaven and a new earth must break all our attachment to this old dying world.”