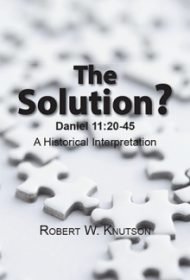 In The Solution? Robert W. Knutson seeks to unpack the 11th chapter of the biblical book of Daniel to help readers understand the history of Christian belief and how some think true Christianity was derailed by the Catholic Church.

In his exegesis of Old Testament prophecy and biting criticism of Catholicism, the author annotates over 20 verses from Daniel that primarily concern the rise and fall of the Antichrist and the end of the world, connecting those passages with the struggles and development of Christianity over the centuries.

Other topics include the Catholic Church’s acceptance of evolution and what Knutson sees as the Church’s rejection of commandments surrounding the Sabbath, worship of idols, and creation of images of God. He also explores how the papacy and misguided theologians obscured “the pure and perfect simplicity of the Christian model,” thus undermining the lives and souls of millions over the centuries.

By understanding how Daniel’s prophecies connect to these centuries-old disputes, the author contends, believers can be “clothed with the righteousness of Christ” and ultimately find a clear path to God.

Knutson has great zeal for his material, and it’s apparent he has done a lot of research; the book is well footnoted. There are, however, two major problems. First, The Solution? tackles such a broad range of issues that it lacks a clear central thesis. Second, many sentences are extremely hard to understand, e.g., “Prior to that experience on earth, the second person of the Godhead hypostasis plant-based incense divinity in heaven was in fellowship with the hypostasis heat, first person of the Godhead Father and third person of the Godhead Holy Spirit, who possessed a dual hypostasis essence of plant-based oil and elemental atmosphere like air.” Such passages not only distract and confound but prevent Knutson’s arguments from being fully realized.

Knutson offers a passionate plea to save souls, but the book needs substantial editorial work before it is ready for the public.