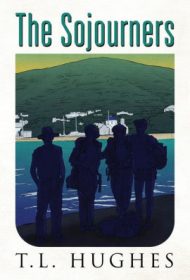 While a standalone novel, The Sojourners is the second title from author T.L. Hughes reflecting upon the early adult experiences of the baby-boomer generation.

It is 1984. Americans Mike, Decky and Luke are in their mid 20s and have chased their dreams of making it big in the music video industry to London. Through Mike’s engaging first-person narrative, readers learn of family, friends and experiences left behind and the group’s awestruck first impressions of London. Hughes skillfully evokes the mood of the moment: from Thatcher, labor market tensions and the recent Falklands War, to punk culture and the Cold War (“President Reagan wasn’t making anyone feel comfortable with all his scary rhetoric about the Soviet Union”).

Unable to find employment, the three decide to make the most of their transatlantic plane ticket by exploring Europe: First stop, Amsterdam. Their journey is filled with colorful characters and mind-broadening experiences with locals. Realizing they seek different things—ancestral connection, love and deeper meaning—the friends part ways in West Germany, and Mike travels alone to Greece. There, he reconnects with someone special, and ultimately finds clarity on the next step in his life journey.

Readers will appreciate the creative, movie-maker lens through which the story is told. Narrator Mike associates moments and experiences with music (from the Rolling Stones to Elton John), likens people to characters in TV shows, movies and novels, and compares landscapes to the brushstrokes of master painters such as Van Gogh.

Unfortunately, the story lacks strong direction, as do the characters: For example, after only one day of unsuccessful job-hunting, the group simply sets aside their dream, deciding instead to spend all that remained of their worldly savings exploring Europe. Readers will wish for a more propelling plotline. Additionally, the dialogue is largely philosophical and often seems labored.

This is a leisurely, literary read. While the meandering plot will deter some, it should hold appeal for those interested in ‘80s pop culture.