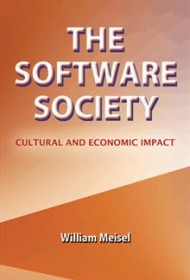 It’s a one-sided love affair: humans intimately depend on computer automation for their mobile lifestyle — and how do computers love them back? Often, by swallowing up their jobs and giving them perpetual software upgrade headaches.

But much of the fearful imaginings that humans project onto computer software, such as predictions that computers will ‘take over’ the universe, are largely unfounded. So says veteran technology industry analyst William Meisel, who debunks in The Software Society what he perceives are some deep-seated myths about the ability of software to dominate human intelligence and will.

Meisel acknowledges that the forces of Moore’s Law (that computer power exponentially increases over time) are still viable but argues that there are limits to what that Law portends for society’s future. Posing more real dangers, says Meisel, are the current patent turf wars, most notably among smartphone providers, and outdated patent laws that may ultimately threaten further innovation.

While there are many analysts and engineers churning out books about the future of a technologically-dependent society (and his excellent bibliography catalogues many of them), Meisel offers keen observations that draw from his long and varied experiences with voice recognition (VR) technologies. A pioneer in pattern recognition theory, Meisel has seen VR grow from a nascent (and often derided) technology to one that has garnered more public acceptance with the advent of personal assistants, such as the voice-interactive Siri.

He holds a hopeful view of the future, even in a shrinking job market, if humans can leverage the power of automation to help them become more efficient, grow businesses in smaller markets, empower disabled workers and find new ways of making computers a partner, rather than a threat, in their growth.

There are better wordsmiths in this genre, and Meisel’s prose could use polishing. Still readers will find his message a welcome alternative to those books full of harpies warnings about a future where humans play second fiddle to their software progeny.