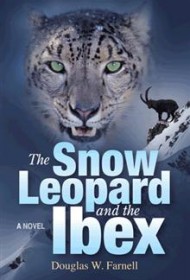 When Daniel Prescott’s small, successful software company is threatened by the U.S. financial crisis, he arranges international financing with his Turkish business partner. While flying from Turkey to Russia his plane is hijacked by Georgian and Chechnyan terrorists. Trapped, this previously mild-mannered man who had suppressed a rigorous military upbringing, envisions his mountain climbing totem, the symbol of his climbing passion: a clever and nimble Ibex escaping a Snow Leopard.

Calling upon this vision, Prescott actualizes his inner strengths, dashingly thwarts the terrorists and safely lands the plane. Returning to the U.S a hero, he is asked by the president to represent his country in various ways.

Meanwhile his good friend of many years, beautiful Arianna hears of the event, realizes that she loves him and journeys to be at his side. Is his business saved? Do the terrorists take revenge? Is true loved served? Only a dangerous government-sponsored trek up the Matterhorn with his Turkish partner by his side and Arianna secretly following holds the answer.

This is a novel about transformation, an amiable man calling on inner reserves to become a hero. This is also an action/adventure novel with plenty of rough and tumble: “Daniel twisted the fork counterclockwise, still maintaining forward pressure… ripping the eye partially out of the socket.” The characters are fully realized, the plot advances logically for the most part, and the book is well written.

Casual readers may grow impatient with the detailed explanations of the financial crisis and the Russian/Georgian conflict, but those who enjoy military history and terrorists getting the sharp end of the stick will relish the ride. The work falls down in the last third of the book where Prescott is implausibly asked to help the U.S. government, and where the romance is too neatly tied up.

The strong beginning and smashing good middle would have benefitted from a more believable and well-thought-out ending. But this is a fun read, nonetheless.