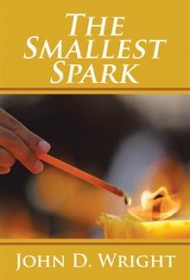 In Normandy in the late 1800s, a 15-year-old girl entered a Carmelite monastery where she remained cloistered until her death from tuberculosis at 24. Born Marie Francois-Therese Martin, she is known to millions of Catholics as St. Therese of Liseuz, the Little Flower.

Therese’s rise from obscurity to sainthood has fascinated many, among them John D. Wright, whose discovery of her autobiography, The Story of a Soul, inspired him to study her life. The Smallest Spark, which traces Therese’s journey from willful child to selfless martyr, grew out of an adult catechism lecture he gave on “the woman I love.”

Drawing from various sources, Wright tells Therese’s story from multiple perspectives: her own and those of three of her biological sisters, all Carmelite nuns. Lyrical and convincing, his prose paints an indelible portrait of an ordinary life lived with extraordinary faith; of suffering not only endured but embraced.

Therese’s religious fervor surfaced early. As a child she prayed for an unrepentant murderer and rejoiced at his 11th-hour conversion. Equating suffering with saving souls, she welcomed opportunities, from sitting with her back unsupported to laboring to the point of exhaustion. Doctors treated her TB by plunging red-hot needles into her back even as she struggled to finish the autobiography her superiors ordered her to write. As she explained on her deathbed, “Everything is grace, and anything I suffer can be offered to God and used for good…”

Wright notes in an Appendix that his information “is derived from a combination of Wikipedia” and “things I remember off the top of my head” from extensive reading on Therese. Wikipedia is generally frowned upon for trustworthy research, and the lack of citations (he lists only a handful of sources) will trouble scholars; less so, average readers.

Still, the book makes for vivid, compelling reading. For those new to the topic, The Smallest Spark offers a satisfying glimpse into the mind and heart of a saint.