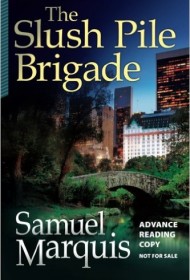 What if someone steals my idea? The Slush Pile Brigade capitalizes on the fear every author feels when sliding that precious manuscript into an envelope and sending it off to publishers.

Author Samuel Marquis gets off to a fascinating start, focusing on powerhouse author Cameron Beckett, who, after a few dozen hits, is having a dry spell. To free up the flow of words, and thus money, from its biggest cash cow, Beckett’s publisher allows him a little tour through the slush pile. Surely just for inspiration, right? He never meant for Beckett to actually copy any of the work, did he?

Flash forward to the incredible success of Beckett’s newest list-topper: Subterranean Storm, now a major motion picture. When one Nick Lassiter buys a ticket to the show, he is stunned to see the plot of his own novel, Blind Thrust, played out on the screen — the very novel he sent to Beckett’s publisher years before.

Nick vows to set the record straight and puts in motion a complicated plot that begins with a believable look inside the New York publishing scene and inexplicably evolves to include Russian spies, CIA operatives, car chases, and plenty of gunfire. The simple premise and lightly developed characters simply can’t support all of this intense action.

Marquis makes the whole bewildering journey entertaining, though, particularly with the supporting cast of quirky college friends who accompany Nick on his mission. Frequent nods to popular literature, and the fact that Marquis himself wrote a novel called Blind Thrust, bring out the book-within-a-book theme, and the New York City scenes and dialogue feel authentic throughout, even with Marquis’ occasional embellishments.

Read The Slush Pile Brigade not for the rewards of carefully crafted intrigue, but for the enjoyable romp that it is.