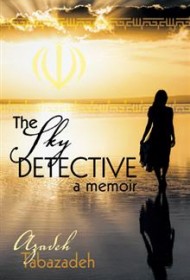 An accomplished, award-winning American atmospheric scientist recounts her coming of age against the backdrop of the Iranian revolution in this engaging and deeply perceptive memoir.

Growing up in ‘70s Tehran, Azadeh Tabazadeh was only eight when two unrelated life events made a lasting impact on her: First, Uncle Mahmood gave her a kids’ chemistry kit, a gift that sparked her life-long love of science. Shortly thereafter,11-year-old Najmieh, a village girl from northern Iran, moved in as household help. Their friendship deeply shaped Tabazadeh’s life-long awareness of class and gender differences, and as the author details a fairly affluent girlhood, she adds pithy observations (“we were born in a place where women just don’t get what they want from life”), which serve to emphasize how deeply entrenched societal views can mold even seemingly cloistered lives.

The girls’ friendship eventually ends when Najmieh is shipped back to her village and married and Tabazadeh gets swept up in the tidal forces of the Iranian revolution. (It is telling of the aforementioned class differences that just before marriage, Najmieh looks forward to life with a “handsom husband” and “healtee babies,” while Tabazadeh nurses her dream of becoming the Iranian Marie Curie.)

In crisp, compelling prose, Tabazadeh peppers her account with memories of school and other childhood preoccupations, even as the country undergoes major political upheaval. The author recounts her resistance at the imposition of Shariat, the Islamic law, which forces even teenagers to adopt the veil. “The shah is brutal, but so are these fanatic revolutionaries,” she writes.

The narrative ends rather abruptly as 17-year-old Tabazadeh immigrates to the U.S., leaving one hopeful for another volume detailing the teenager’s assimilation into the American melting pot.

This is a sobering and enlightening glimpse of growing up in the shadow of a revolution — a struggle that merely replaced one kind of oppression with another. Readers of all stripes will appreciate a front seat to the proceedings in The Sky Detective.