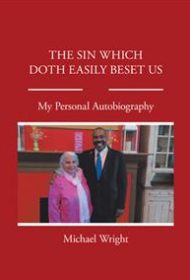 Michael Wright’s autobiography recounts his childhood, extensive military service and life of parenting and ministry with his wife. It includes photographs chronicling his devotion to his country, family and the Lord. But there’s a twist: The book is also Wright’s public confession of his battle with pornography, fought off and on for years.

Wright, now an ordained chaplain with a master’s degree in social work, explains: “I realize some may think that confession does not necessarily include a public forum where the faults are displayed but rather privately… Nevertheless, I felt led by the Holy Spirit to do so in my case …”

This book is in need of copyediting. It has numerous typos, missing words, extra words, and incorrect words (“vain” for “vein,” “adopt” for “adapt,” “would” for “wound”). In one section, three sentences are repeated verbatim. Another sentence reads: “She eventually came around and forgave me but this incident but I knew from within that I needed to try and get a handle on the situation…” Additionally, the text contains lengthy paragraphs, some more than a page. Shorter passages would help focus the content.

Still, Wright’s transparency is admirable, and his book will be meaningful to his intended readers: those also struggling with addiction. Other addiction specialists, pastors and counselors may find this a useful resource as well.