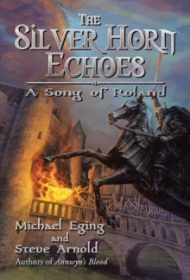 Knights, battles, treachery, valor! No story set in the Middle Ages is complete without such elements. Much to the reader’s delight, The Silver Horn Echoes: A Song of Roland provides them all.

Authors Michael Eging and Steve Arnold have clearly done their homework on the period surrounding the bloody battle of Roncevaux, which erupted after King Charlemagne destroyed the city walls of the Basque capital of Pamplona and the Basque retaliated. The authors’ believable fictional tale centers on the king’s right-hand man Roland and his exploits leading up to and during the battle.

Students of the medieval era will be familiar with La Chanson de Roland, an epic lyric poem that outlines the heroics of Roland and provides the springboard for this tale. But even those unfamiliar with this piece will find themselves caught up in the saga and rooting for Roland as he swashbuckles his way through the Pyrenees Mountains, fighting for the honor of his Frankish King against not only the marauding Saxons, but also against the ploys of his treacherous stepfather Ganelon and other opponents.

Throughout, he is aided by his dead father William’s trusty sword Durendal, and at times the chimera of William himself. The eponymous silver horn Oliphant hangs by his side, ready to be blared in triumph.

This is a virile book, and as such, the women in it may be a bit two-dimensional. The men are fully-fleshed, however, and there’s no difficulty in deciphering the bold, brawny heroes from the sniveling, dastardly foes. The authors have a knack for narrative, and their in-your-face descriptions of the blood, guts, and sweat of battle bring the story to life. In addition, the summary of how William the Conqueror uses Roland’s story to inspire his own victory decades later enhances the prologue and epilogue.

Those who relish getting lost in a tale of heroics and derring-do will surely enjoy this read, as will history buffs of the Carolingian era.