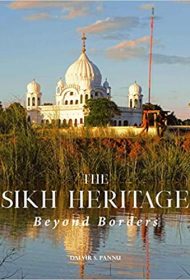 A coffee-table book is intended to entice readers with its visual appeal and keep them interested with its engaging narrative. This book excels at both, with photographs and legends that explore over 80 Sikh shrines in Pakistan.

In addition to many Sikh gurdwaras (temples) in Punjab, India there are several other gurdwaras in the Pakistan side of Punjab. This book identifies six regions in Pakistan Punjab and dedicates a section to each. Each chapter focuses on one shrine, showcasing a total of 84, with high-quality pictures of the sites and accompanying text that relates the legend of how that shrine came about. (For example, Gurdwara Maal Ji Saheb was built on the site where it is believed miracles happened, including the time Guru Nanak, founder of Sikhism, fell asleep under a tree, and the shadow of that tree didn’t move from midday until he woke up several hours later.)

From the photographs, readers can tell that many of the sites’ exteriors are in disrepair. Pictures of the interiors, however, indicate that virtually all are in good shape – especially considering that most are around five centuries old.

What makes this a unique coffee-table book is that it integrates legends from not only Punjabi and British sources, but also Urdu and Farsi sources. This helps readers who are intimately familiar with Sikh hagiography appreciate the various local interpretations of their faith. Some readers may be surprised to find legends that emphasize cooperation among inter-faith communities as part of common folklore at some of these gurdwaras.

While some of the shrines are open to devotees and tourists, others are not as accessible. The book would have been more useful if it had provided an additional paragraph for each site describing how accessible it is to devotees, scholars, and tourists.

Regardless, The Sikh Heritage: Beyond Borders is an intriguing and beautiful work—one that skillfully highlights the richness of Sikh religious culture.