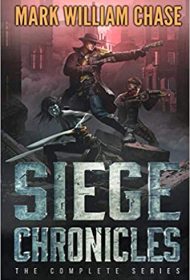 A rip-roaring fusion of classic adventure fantasy and steampunk, Mark William Chase’s Siege Chronicles follows a band of mercenaries as they embark on myriad perilous quests with nothing short of the fate of the world in the balance.

The story is set in the realm of Mythania, a fantasy lover’s dream world replete with sorcerers, vampires, demons, dragons, and gearmeisters capable of creating mechanical marvels. It begins when a group of mercenaries, led by gunslinger and former bounty hunter Davrick Caliburn, sign on to steal a legendary dragon stone from a train full of soldiers and dark-magic wielding wizards. Rounding out the group are Talyaana Rae, a badass vampire fighter with an expertise in blades; Nolan Vanderall, an astral mage; and Sidrick Voltelion, a young engineering savant whose mechanical prowess borders on magical.

This all happens amid the backdrop of a war that threatens the very realm itself: The triumvirate of kingdoms in the Grand Imperium, a government ruling part of the realm, are attempting to crush an alliance of free nations so they can recreate the world for their dark purposes.

The group of mercenaries-turned-heroes proceed from one edge-of-your-seat thrill ride adventure to the next: finding lost temples with mythical artifacts, escaping demon realms, and more. Some of the members of the group change as the story progresses: At one point, Sid’s little sister Adara (a brilliant engineer in her own right) joins the action, as does Brakjuk, an ogre with a penchant for blunderbusses; and Seraidre, a magic-wielding elf.