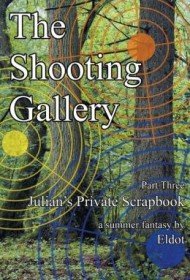 The Shooting Gallery is the third in Eldot’s five-part series: “Julian’s Private Scrapbook.” We find ourselves in a Boy Scout Camp, where our pubescent hero, Julian Forrest, comes of age in June 1962.

Julian is a prodigy when it comes to drawing, a talent that garners many accolades. As we might expect, there are other skills to be mastered at camp: swimming, canoeing, archery, cooking — and, in this case, sex. In Barr’s Meadow (Part 1) readers came to appreciate Julian’s beauty, exuberance, affability and guilelessness. There, Eldot laid out the rituals and routines of scout camp: inspection and clean-up, naked swimming and campfire sing-alongs. In the midst of this cheery beehive, Julian had his first sexual experience with another scout; another encounter involved two older, more experienced boys.

In The Shooting Gallery, the author again presents the everyday activities we might expect, but now, sexual behavior is more frequent. While this kind of intimacy is often explored in fiction, it’s much rarer to find it imbued with positive, canny eroticism, as it is here. In The Shooting Gallery, the tone is somewhat Utopian; the characters are not influenced by the usual shame or taboos society places on sex between males. Boy Scout Camp becomes a refuge where characters freely (though conscientiously) experiment with same-gender eroticism.

Eldot not only examines male-only sexual episodes, he anchors them in verisimilitude. Unlike more fantasy-driven erotica that sets up outlandish, compulsive scenarios, the sex here arises organically from the plot. The author goes inside the heads of the characters, so that we understand their bashfulness, their longing or curiosity. There is a nonchalant, playful tone that removes the stigma of queer intimacy that easily might have tormented teenaged American men in 1962.

All in all, The Shooting Gallery is a satisfying, intelligent story, notable for its warmth and credibility. It’s perfect for those who appreciate homoerotic content without the usual overblown raunch so common to the genre.