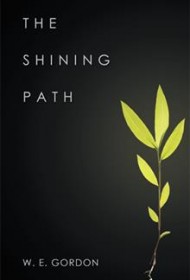 As author W.E. Gordon notes in his preface, the poems in The Shining Path trace “a poetic narrative winding its autobiographical way across key locations on my life’s time-line.” This speaker meditates on memory, love, loss, and the natural world while incorporating many religious, literary, and philosophical allusions.

The collection is structured thematically in four sections: “October Flew The Coop,” “Lucid Dreaming: A Story in Four Parts,” “Song of the Dead Leaves,” and “Time and Eternity.” The poems progress from more personal experiences grounded in particular places (“I am now sitting in Bar Botega Victoria/ drinking a cup of coffee”) to those that express more abstract and spiritual states of being (“I sit down serenely unattached/ all conflicts ceased// wordlessly I sit in the/ presence of the Prince of Peace.”

Gordon’s speaker is knowledgeable and his ethos sincere, but many of his stanzas are prosaic rather than prosodic, explicating for readers without the artful subtlety and rhythm of poetry. For instance: “my past is still alive within me/ the full meaning of both/ the present and the future/ remains partially hidden in my past/ requiring a poetic theory/ of excavation and exploration.” Instead of telling readers that “Poems and rhymed words/ are strong feelings giving/ shape and meaning to sounds/ that stir the blood”—an interesting explanation of what poems do—Gordon is encouraged to “stir the blood” of readers more consistently through strong, sensuous imagery. His writing is most promising when he communicates his feelings directly with an attention to sound, as he skillfully does here with the alliteration of the “h” consonant: “My homeless mind was burning hot/ for that heavenly connection.”

Such moments are, unfortunately, infrequent here. Gordon might consider turning his denser material into prose-essay form, as well as revising with an eye for more visceral imagery, in order to connect more deeply with his readers.