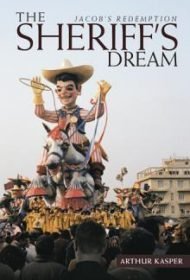 Arthur Kasper’s The Sheriff’s Dream combines historical figures with a fictional protagonist to re-create an important era in American history—the unraveling of the Soviet Union and the end of the Cold War.

The story revolves around Father Jacob Gorska. As a child in Poland when the country came under Communist control following WWII, Gorska watched in secret as his parents were murdered by a psychopathic Soviet officer who mistakenly thought they were Nazi collaborators. Friends of the family spirited the lad away to America, correctly believing the officer wanted to kill the child, too.

Growing up privileged in America, Gorska drifts into a lascivious and meaningless life until he finally finds his purpose in the priesthood and as a serious scholar. Then, years later, he’s recruited by Pope John Paul II and President Ronald Reagan to be their courier for a dangerous secret mission to aid Solidarity, the emerging democratic movement that presaged the Soviet Union’s collapse. Gorska is pegged for the job because he’s a native Polish speaker and established expert on East European history.

The plot has the makings of a page-turning spy thriller, but the narrative falls short of electrifying. Gorska’s life-changing decision to join the priesthood is poorly dramatized and falls flat. And while the book devotes detailed attention to Gorska’s young life and preparations for his mission, the mission itself seems an afterthought. Readers never gain a clear understanding of what the undertaking accomplished.

There are also a plethora of technical errors: sentences with missing words; misspellings (“distinct chin” vs. “distinction”); wrong words (“was” vs. “were”), and incomprehensible sentences (“The license P you will find & compare Wells Fargo lates were stolen from an East German truck”).

Careful editing and revision to add punch to the writing would elevate the story. As is, readers will wish for a more stirring and heroic tale of the sacrifices required to bring down Soviet domination of Eastern Europe.