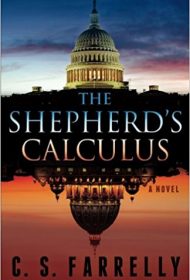 In this compelling political thriller, author C.S. Farrelly takes a fresh look at the role of religion in politics.

Ally Larkin, college graduate and staunch Catholic, finally lands a dream job working for the re-election campaign of incumbent U.S. President Arthur Wyncott. The campaign is running smoothly until independent candidate Thomas Archer, a pro-choice Catholic, enters the race. As he gains ground with the large bloc of Catholic votes, the campaign turns to Ally for strategy.

Soon, the line between religion and politics begins to blur, and Ally starts to question everything she thought she knew. But it’s not until journalist Peter Merrick begins investigating the death of his friend and mentor Father James Ingram that it becomes clear how far the Wyncott campaign and the Church clergy were willing to go to get Wyncott elected.

While readers may be inclined to think that Ally and Peter will eventually become romantically involved, the story, to its credit, steers clear of the clichés that characterize many political thrillers. Instead, the novel offers an involving, complicated plot regarding a quid pro quo deal between the Wyncott campaign and the Catholic clergy. The sexual abuse scandals of the past are involved, but the author incorporates them into her plot in a way that doesn’t feel like a re-hash of old news.

She also has an ear for dialogue that rings true to her characters. As an idealistic Ally clings to her faith, she says to a co-worker: “I get it, Mark. You read The Da Vinci Code and you think the halls of the Vatican are teeming with sinister puppet masters. But it’s not.”

The ending may be a little pat for some, but overall, the story is morally complex, timely, and a thought-provoking look at the difference between blind faith and blind ambition.