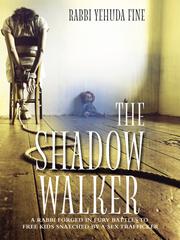 For years, Rabbi Yehuda Fine worked with youth on the streets of New York, a calling recounted in his memoir Times Square Rabbi. Here, he taps into that experience for a brutal novel about sex trafficking.

Taking a cue from noir influences, such as crime novelist Andrew Vachss, Fine constructs a believable and technically precise cat-and-mouse game between a rabbi and a serial killer. His hero is Eitan Leib bin Leah, a street-smart justice warrior more likely to wear a Yankees cap than yarmulke. His partner is David Wong, a shaolin warrior who serves as friend, protector, and brother-in-arms.

Their prey is Solomon Hayman, a vicious child trafficker who sells young girls to Arab tycoons. He’s developed a taste for children’s pain, dismembering them often, and in ugly ways. The situation is painful for Eitan: “All alone with his thoughts and everything coming at him was now under the label of ugly horror, loss, death, torture, slavery, and now this dark wraith arrived, and he was cutting his way through girl bodies like butter.”

Their conflict builds into a holy war between good and evil. Eitan and David connect with the Israeli secret service for help, while Solomon makes a devil’s bargain with the Russian federal security service to kidnap blonde virginal twins in Orlando.

It’s a stout entry in an underserved subgenre, barring a few missteps:  Fine’s prose is vivid, but his highly trained heroes can seem superhuman at times. The book is less effective when it turns political with mentions of “crazed, angry zombie Arabs” and “the PC leftist crowd.” And even longtime crime readers should be aware that the content is extremely graphic, from blunt discussions of child abuse to a scene of outright torture.

Still, memorable set pieces like an airport shootout and the final fight between Eitan and Solomon stand out. Moreover, Fine’s spiritual patina and good intentions lend this dark story a silver lining readers will appreciate.