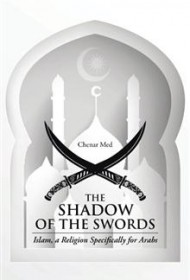 Chenar Med, born into a South Kurdistan, Muslim family, has written a book thoroughly analyzing the Quran’s verses, or ayat, in order to expose contradictions within the Islamic religion.

Med is a graduate from the University of Kurdistan. He has dedicated half of his life to studying both Arabic and Islam because he wanted to think more critically about his religion. In his view, rather than being the humanistic religion Muslims proclaim, it is an oppressive belief system, worshipping an oppressive god. Med concludes that the Prophet Mohammed was not a true prophet and that the Quran is full of contradictions and inconsistencies.

Using only Islamic texts and scholars, Med convincingly argues that the Prophet Mohammed was a sex addict who even accepted sex slaves as gifts; a hypocrite who professed kindness and forgiveness but frequently sought revenge and used extreme violence to expand the Arabic empire; and an oppressor, particularly of women.

Med also points out many imperfections in the Quran. He notes that there is no logical order to the ayat, that some are repeated, others have been deleted and replaced, and many are incomprehensible. He concludes that Mohammed, rather than Allah, is the Quran’s true author.

The author’s narrative is intriguing and often persuasive, but he occasionally makes some leaps in logic, such as asserting that if we can doubt Mohammed is a prophet, then we can also doubt others, such as Jesus. Med even argues that had Jesus’s ministry lasted 13 years like Mohammed’s, rather than three, Jesus would have used the similar violence to spread Christianity. Another distraction is that Med sometimes switches from an objective, analytical tone to heated polemic. While this illustrates how deeply troubled he is by the religion, it ultimately undermines the book’s scholarship.

Despite such issues and some lapses in grammar, the book offers much food for thought. Many will appreciate Med’s thorough analyses of the Quran’s ayat and his rich accounts of history.