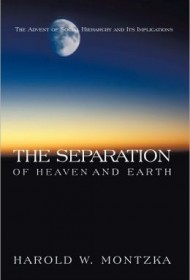 In The Separation of Heaven and Earth, Harold W. Montzka utilizes the disciplines of anthropology and the study of religious histories to demonstrate the cultural implications of both egalitarian hunter-gatherer societies that believed in a divine creator and domineering societies that embroiled religious belief in hierarchical structures.

Montzka begins with the premise that early hunter-gatherers possessed a belief in a divine creator, that this God was personal, and that heaven and earth were cohesive. As a direct result of this cosmology, bands of hunter-gatherers were egalitarian with no “inherited leadership or social classes.” But according to the author, these egalitarian hunter-gatherers eventually suffered ethnic disunity that can be directly attributed to divine intervention, specifically Genesis 11:5-9 NIV. It’s this very disunity — and the belief that “the environment could be controlled by ritual” — that led to hierarchical and warlike societies detached from a Supreme Being.

The Separation of Heaven and Earth is at its most provocative when Montzka effectively melds archeological evidence with the social implications of religion — as he does with his fascinating exploration of cultures from India, Mesopotamia and the Americas. The strategy is least convincing when he uses his vast stores of knowledge to attack liberals and scientists, as he does throughout the text, specifically in the conclusion.

While the tirelessly researched examinations of ancient cultures are an invaluable resource, they are often overshadowed with such personal biases. As a result, it’s hard to imagine an audience for a book that alienates non-evangelical Christians while utilizing the science that evangelical Christians often regard with suspicion. While Montzka insists that the disciplines of science and religion aren’t mutually exclusive, he has difficulty making that case in The Separation of Heaven and Earth.

Those who can overlook the author’s biases will find much of interest here; others are likely to be frustrated by the reading experience.