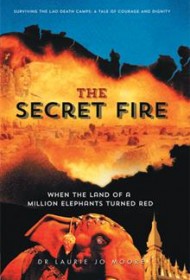 In this is profoundly affecting book, Dr. Laurie Jo Moore recounts the history surrounding the horrific Pathet Lao death camps implemented after the fall of Saigon in 1975.

Moore, an M.D. with psychiatric training and an expert in Post-Traumatic Stress Disorder, worked in the Indochinese Psychiatric Program at the Oregon Health and Science University in Portland. There, she dealt closely became known to the 12 Lao survivors, who sought her out to tell their stories.

Moore’s opening chapters provide a somewhat academic look at basic human survival mechanisms and the history of Southeast Asia and of Laos and set the stage for these stories, which are gripping, terrifying, and ultimately enlightening. Rather than offer translated dialogue from the survivors, Moore relays their stories in her own words, describing in straightforward prose how, for example, Mr. Khamphan and others were chained at the ankle and denied food and water until half of their number died. Similarly, Mr. Pany and 27 of his compatriots were chained to their beds until all but two had died.

But Moore gives equal time to how these people survived. Themes run through the stories: Survivors worked as hard as they could; did their best to remain conscious, and created diversions for themselves (including one who found a way to play music). All had symptoms of PTSD or survivor’s guilt. Moore’s descriptions of their readjustment make for as gripping reading as accounts of their imprisonment. Sharply reproduced photos and maps enhance the tales of terror.

Moore’s foreword and commentary discuss how the American war resistance movement was incited and manipulated by Soviet/Vietnamese communist propaganda. Calling for present-day Americans to not forget the Vietnamese and Laotian people, she demands: “It is time for the American people to stand up … Listen to your heart. Give a damn.” It is impossible for any reader of The Secret Fire not to give a damn.