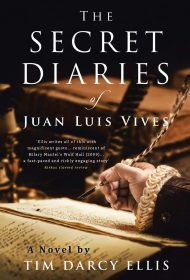 In this beautifully detailed, thrilling historical novel, author Tim Ellis brings back to life the largely forgotten Juan Luis Vives, a Spanish Jew and leading Renaissance humanist who, in his time, was as widely respected as his friends and intellectual heavyweights Thomas More and Erasmus. Here, Vives poses as a Catholic to avoid the fires of the Inquisition but ends up entangled in King Henry VIII’s deadly war with the church.

The story picks up as Vives studies, writes and teaches in what is now Belgium, where he narrowly escapes the unmasking of his true identity. Despite the close calls, he’s beckoned to England to tutor Mary, daughter of Catherine of Aragon. Catherine is Henry’s first wife whom he now desperately wants to divorce—in defiance of Catholic teachings— because she has given him no sons.

Vives walks a swaying tightrope as both Henry and Catherine separately ask for his assistance to support their directly opposed demands. He must betray one, and whatever he decides could cost him his life. Adding to his predicament is the fact that Catherine belongs to the Spanish royal family whose Inquisition is burning Jews at the stake, including members of Vives’ own family. How could he ever support such an enemy?

Vives speaks through his secret diaries, discovered five centuries later, as he intimately tracks his tortured conscience. All the while, he clings to a dream that he could cleverly manipulate the king into allowing hunted Jews sanctuary in England.

The story rushes ahead with chilling urgency, and Ellis’s elegant prose brings it alive with telling detail: flesh burning at the stake; a lover whose troubles still haven’t “dimmed the spark of her pupil or sullied the white of her eye.” The author delivers complex, believable characters, framed by meticulous research to accurately portray the realities of the turbulent times.

This enthralling story is sure to please lovers of high drama, international intrigue, momentous history and psychological thrillers.