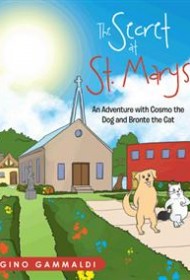 Inspired by a real-life dog and cat, Gino Gammaldi has written a picture book about a fictional search for the secret at St. Mary’s church.

When Bronte the cat overhears talk of a secret at nearby St. Mary’s, she and her friend, Cosmo the dog, decide to find out what it is. They ask a number of other animals – most of whom have some role at the church – if they know what the secret is. The animals eventually learn that the “secret” is the arrival of an Athinkobator, a computer-like device that will help the animals perform their regular church tasks more easily and efficiently.

Gammaldi’s story can be tedious, as any anticipation about getting closer to the secret is countered by the animals’ repetitive strategy: to ask yet another animal if he or she knows the secret. It’s revealed that Mr. Bear, the church manager, has masterminded the mystery in an effort to get the animals working together. But instead of the animals contributing ideas, each just says “I don’t know” and leads the searchers to the next animal. It’s not uncooperative behavior, but it’s not the best example of true teamwork, either. This seems like an odd fit for the lesson of the book.

Gammaldi’s storytelling can be quirky. When Mr. Owl, a retired doctor, greets the detectives on their search, the animals eat a cake, after which Mr. Owl examines them “because they looked very tired.” Mr. Owl’s solution is to give everyone “a good checkup and a healthy sugar lolly to give them energy.”

Questionable nutritional advice aside, The Secret at St. Mary’s feels very insular. A few in-the-know readers may enjoy the story and identify with its plot or characters. Most readers, however, will find themselves much less engaged in this offering.