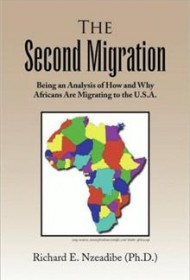 The motivations that compel modern-day African citizens to migrate to the United States provide the basis for this impassioned text by a native Nigerian, a historian who has studied and been employed in the U.S. since 1962.

The book examines the causes and effects of migration today, contrasted with the millions of enslaved Africans brought to the U.S. in the 17th through 19th centuries. In a short history, Richard E. Nzeadibe details the rogues behind the slave trade — not only Europeans but also African middlemen who ruthlessly seized and sold their compatriots for profit.

Those seeking entry into the U.S. today, he says, are fleeing political unrest on their continent for safety, security and the kind of educational opportunities the author himself found in America. The book discusses economic and political problems that plague Nigeria and hamper the education of three-fourths of its populace. It also suggests what African policymakers could learn from the U.S. in regard to government leadership, roads and electricity. Nzeadibe then shares what he considers the elements of success in the U.S.: “patience, hard work, endurance, knowledge, skills and sacrifice.”

While the author’s heart is in the right place, he fails to document historic events with a bibliography to verify assertions (though there is an index), and bases his other ideas on personal observations. More damaging is that the book is quite dated. It lists the tallest building in the U.S. as the “Stock Exchange Building” in Chicago and expresses the author’s hope that “one day, an African-American is going to be president of the United States of America.” In addition, common places such as the White House are misspelled (“Whitehouse”), delivering an unprofessional presentation for someone with a Ph.D.

In short, while the book is strong of purpose for Africans considering a move, it is erratic in execution and needs serious editing, updating and documentation.