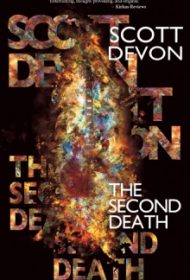 Scott Devon’s irreverent novel of the afterlife follows recently deceased insurance salesman Henry Ford who, after a losing battle with stomach cancer, finds himself on a retributive quest through a bizarre partying hellscape. His new reality is inhabited by demonic rockers and hedonistic revelers and powered by a killer soundtrack of diverse songs from the Beatles to Wild Cherry to Led Zeppelin.

The deeply flawed Ford, an alcoholic who cheated on his wife and neglected his children, is much like his father Charlie, who abused Ford’s mother while alive. Ford and his father are described similarly as “potty-mouthed mutha truckers, talking on CBs and driving semis on hell’s highway.” After Ford’s spirit attempts to make peace with his wife, his adult daughter, and son, who died from a heroin overdose years earlier, Ford meets his father in the afterworld. Trying to save his son from a similar eternal nightmare existence, Charlie attempts to find a way out of Hell.

Ford’s countless music references are absolutely brilliant, and the narrative offers irrepressible attitude and wit (“The bar’s closed, so go home Billy. Johnny Cash in your cow chips; the party’s over”). Unfortunately, the latter also becomes a major weakness; the nonstop insolence, while initially amusing, soon gets old.

Readers hoping for a profound journey of self-discovery will be disappointed that Ford remains unchanged throughout his spiritual passage. Additionally, while Devon’s writing style is impressively multi-layered, there’s sometimes a sense he’s trying to do too much. For example, while Ford is described as not much of a reader, the first-person narrative includes more than a few literary references (Hunter S. Thompson, Ken Kesey , etc.).

Despite such flaws, there’s much to like here. Consider Second Death the illegitimate lovechild of Dante Alighieri and Janis Joplin after a week-long bender in a dive bar killing off cases of cheap whiskey and doing endless lines of coke off of strippers’ backsides. Sex, drugs and rock and roll—in purgatory.