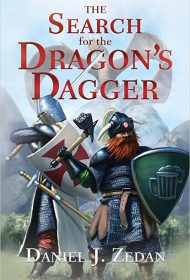 In the Author’s Note to his fantasy novel, author Daniel Zedan explains that the inspiration for the sprawling tale stemmed from a role-playing game. The novel’s protagonists—the stoic paladin Aramas and the spunky dwarf Loki—began as characters in a long series of Dungeons and Dragons campaigns.

Indeed, The Search for Dragon’s Dagger will feel familiar to D&D players. Set in a sprawling world filled with magic, mystical creatures and otherworldly dangers, the book’s heroes seem like stock role-playing characters. Aramas is a strong, silent warrior who is lethal with a blade; Loki is a gritty fighter who loves to revel, carouse and fight.

The duo has just battled a black dragon and recovered a mysterious opal that seems to possess mystical power. When the pair return the stone to Alissa, ruler of Spring Green who set them on their initial quest, she charges them with rescuing two kidnapped sons of a local armorer and connects them with unlikely allies: Kriv, a young dragonborn yet to grow his full wings, and Aria, a tiefling with wings and a prehensile tail.

As the group undertakes its mission, it uncovers the presence of a deeper darkness, an evil determined to return and harness the opal’s power and that of the dragons, a race of creatures long thought dead.

This adventure rolls with spontaneity and action. Zedan skillfully folds the best parts of the D&D world into his story. Readers will find this appealing, even if his writing style could use some polish; for example, the entire narrative is written in present tense, which leads to some confusing moments during flashbacks. Also, Zedan casts all his characters with the same formality, including barmaids and thieves.

Despite this, the author creates a comprehensive story out of a series adventures. As his heroes track down the source of dark forces that have returned to the Hinter Land, the book eventually feels less like a role-playing game and more like a cohesive, and enjoyable, novel.