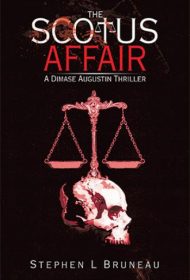 The novel begins when Ben Johnson learns that his clandestine lover of over 40 years, Acadia LaFleur, has been attacked in a home invasion and lies in a coma. Seeking justice for Acadia, Ben enlists his friend Augustin to investigate.

Meanwhile, an escort who goes by the name Daisy May sees a text she shouldn’t have on the phone of Senator Richard Monroe. She doesn’t understand it, but it has something to do with the recent death of a Supreme Court justice and a top-secret operation known as SCOTUS.

Augustin arrives in Louisiana and finds there’s been an attack on a second woman named Acadia LaFleur, this one fatal. As Augustin investigates to determine the killer’s motive, he comes up against the players in the SCOTUS conspiracy – who include not only Monroe but members of the FBI, CIA and other power players – as they scramble to salvage their increasingly botched operation.

Bruneau makes a refreshing choice to portray incompetent conspirators rather than slick stock villains. Monroe’s and his cronies’ antics are often mordantly funny as they turn on each other. The plot features enough twists to keep readers on their toes, without becoming too outlandish. And Ben and Acadia’s star-crossed love story makes a poignant counterpoint to all the mayhem.

Readers might appreciate more information about Augustin, however, especially as he’s a recurring character. Bruneau has given him an intriguing background, including immigrating to the U.S. from Haiti as a child and serving in the U.S. Special Forces, but offers little present-day character development. He’s something of a cipher compared to well-developed supporting characters like Rufus Manteau, the inept Louisianan hired to do the conspirators’ dirty work.

Overall, however, The SCOTUS Affair is an entertaining political thriller—one that should delight fans of the genre.