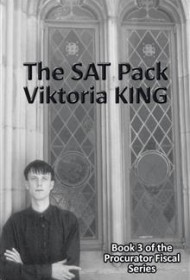 Series fiction can allow readers to build a relationship with characters that deepens with time. The SAT Pack, book three in a series, illustrates author Viktoria King’s flair for crime fiction, but also leaves many loose ends untied.

At just 67 pages, King’s story doesn’t have room to bring new readers up to speed, so we’re thrust headlong into a woman’s graphic description of the sexual abuse she and a friend suffered at the hands of a man who drugged them. It leads detectives to a house where a shootout takes place, injuring a female detective and one of the bad guys.

After a detailed description of the detective’s surgery and the villain’s treatment of his own wounds, a few plot points move things forward before the story abruptly shifts to a young couple on a date, having sex. They are suddenly abducted by three women who torture the man and sexually assault the woman; she is later able to escape. It turns out one of the assailants was a victim of the titular “SAT Pack.”

From events in a hospital to the villain treating his own gunshot wound, King has a commendable eye for detail and scene setting. But there’s simply too much activity stuffed into too few pages for this story to succeed. Readers will leave puzzling over many plot elements. For example, detectives searching for the escaped female victim chase her over the edge of a cliff, causing her death, then stand around nonchalantly as if it were all in a day’s work. The title refers not to a college exam study group, as readers might expect, but the “Sexual Assault and Torture Pack,” yet virtually no background information on this group is shared.

King has the material for an engaging novel, but the book is too short to be effective and fails to offer the grounding necessary to orient new readers to the series. This makes for an unsatisfying read overall.