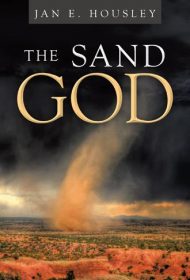 Jan E. Housley’s The Sand God is a Southwestern whodunit set in a tiny town north of Albuquerque.

The story is narrated by Andy Bling, a young reporter specializing in Indian affairs. When his editor learns that a young woman, Carmelita Mendosa, has gone missing in Bullsnort, he dispatches Andy to report on the case. The authorities have made no progress, but locals are suspicious of the sheriff and the town’s lady lawyer; the sheriff was sleeping with Mendosa and was believed to be having an affair with the lawyer.

From the moment Andy enters Bullsnort, he’s caught up in mystical and supernatural events. He begins receiving revelations from Indian guides who promise he’ll obtain spiritual assistance when he most needs it during his investigation. Furthermore, during a ride in the desert, he watches as a fiercely swirling mound of sand becomes an ancient man with flowing white hair. Frightened at first, Andy comes to believe he has seen God. He is also invited to participate in the cleansing ritual of a sweat lodge after he reveals to a local elder that the spirits have contacted him.

As Andy gathers information and even an eyewitness to the crime, he quickly becomes a target of local violence.

The author delivers fascinating glimpses into Indian life and lore in this narrative, but unfortunately, his storytelling falters. He often focuses on mundane or unnecessary details that derail momentum. For example, Housley describes the activities of the Penitentes, a Christian sect that recreates the crucifixion of Jesus during Lent. While interesting, this has little to do with the story. Further, the mystery is solved using DNA, which wasn’t used in U.S. criminal cases until 1987. (The story is set in 1980.)

While the author displays enthusiasm for Native American history and practices, some revision would help this novel capitalize on that strength.