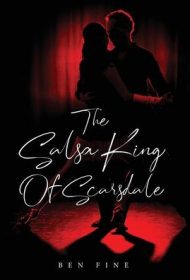 Ben Fine tells the story of a lecherous doctor in his novel The Salsa King of Scarsdale.

Ira is also 35 pounds overweight, has love handles, and is bossed around by his wife and his mother. He’s more than a bit of a lech: He gets erections and fantasizes about his attractive patients.

Enter Inez, whom Ira hires as the new X-ray technician, even though it’s his senior partner’s prerogative. Soon, he’s in a flirtatious relationship with this beautiful single mother, and after salsa dancing with her, they begin an affair. “As on the first night, he should have been guilty, but he didn’t feel that way,” Fine writes. “Inez made him feel important if not exactly loved.”

Their short-lived relationship ends when Inez returns to the Dominican Republic to be with her son and mother, but she says she’ll take Ira back if he learns to dance. As Ira does so, he discovers himself and soon becomes the “Salsa King of Scarsdale.”

Indisputably skeevy, Ira isn’t a sympathetic character, but he’s compelling and interesting, and readers will be drawn into his world. Fine’s often-humorous character descriptions ring true to life.

The narrative’s main problem is that the female characters seem to fall into two categories: they’re either gorgeous and likeable or fat and mean. Ira’s wife, his daughters, and the female ob-gyn partner who works in his practice all seem mostly one-dimensional.

Still, there’s a sense of hopefulness, and the novel tells Ira’s story in an upbeat fashion. Although Ira is reprehensible in many ways, Fine’s writing is riveting, and even if readers don’t like him, they’ll find themselves rooting for him as the story unfolds.