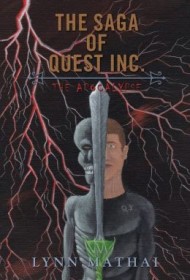 This novel—which, in very broad strokes, is a much-simplified fusion of Dan Brown’s The Da Vinci Code and Michael Crichton’s Timeline—revolves around Phil, a 16-year-old living in a Long Island orphanage who, after discovering that his beloved grandfather Buzz was a member of a secret group of benevolent adventurers, decides to follow in his footsteps.

Although his parents are dead, Phil’s life is close to idyllic; he has a close-knit group of friends, a nurturing keeper named Muggsy, and Buzz lives in a retirement home nearby. But when his grandfather is poisoned to death by the facility’s manager, Phil learns that he was a member of Quest Inc. (Q.I.), a covert organization involved with helping humankind. Muggsy reveals to Phil that she is now heading the group and that it was Buzz’s wish that Phil become a junior commander. So, armed with his grandfather’s crossbow and sword, Phil sets off on his first mission: to travel back in time to the Middle Ages and retrieve members of a group known as the Warriors of Raw.

There are two fatal flaws in this novel. The first is a clunky narrative that documents the characters’ every move, even the most mundane. For example: “…Phil and Alex started playing Forza Motorsports 3 on Xbox. A half hour later they turned off the Xbox and began to play pool. A little while later Phil stopped playing pool.” Meanwhile, critical sequences in the storyline that should be vividly described are barely explored, such as Phil’s trip back to the Middle Ages. Readers don’t know the year or even the region of Phil’s destination, just that the place is called Old York New.

The narrative is also inundated with the repetitive phrases, such as, “a second later” or “a minute later.”

The novel has a rushed, unfinished feel to it, particularly the last few chapters. While it offers an ambitious storyline, it is deeply flawed in its execution.