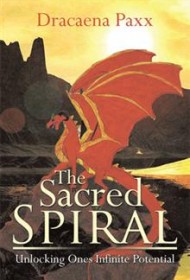 Seeking to transmit what she learned from her German spiritual master, Wiccan practitioner Dracaena Paxx wrote down everything she felt a person would need to know to benefit from the “Draconic Tradition,” an esoteric practice she embraces. The result is The Sacred Spiral, consisting mostly of recipes for magical and worshipping rituals but also including prayers, fairytales, chants, rhymes, and on occasion the author’s own philosophical musings on pagan worship and how she feels humans should behave.

The exceedingly brief chapters—some don’t fill a page—cover a wide range of topics, from how to honor various deities for the specific qualities they bestow upon humans to which phases of the moon are most conducive to particular magic spells.

The tradition the book focuses on, Paxx explains, is “based on the workings of the universal dragon. Yes, many people see dragons, or fey, as a large part of and result of how they understand universal energy.”  Paxx learned this aspect of the ancient Wiccan religion from a man named Prideth. They studied together for a year and a half before he passed away, and she felt compelled to pass his teachings along to others.

Familiarity with Wicca and Celtic-Norse mythology may make it easier to navigate this book, which is peppered with esoteric words such as “sabbats,” “Cernunnos,” and “Samhain” that may stymie novices. Even then, the book may be challenging, due to organizational issues. The text is like a witch’s brew itself, with a little of this and a little of that thrown in; sections seem organized by whim. For example, in the part titled “All Energies Unite,” readers encounter, in this order, a fairytale, a festival, a rite, a god, the author’s opinion on pride, another festival, another rite — without connecting explanations.

Despite this, there’s a wealth of material here. Most readers will take away something, even if it is just a peek into an unfamiliar and exotic spiritual practice.