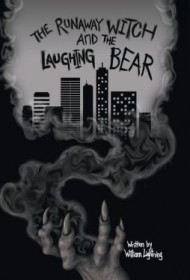 Redemption and heroism comprise the themes in William Lightning’s debut novel The Runaway Witch and the Laughing Bear. The story involves David and Nathanial, two Native Americans whose narratives are portrayed in successive chapters and in different eras.

David’s story occurs in modern-day Los Angeles, while Nathanial’s saga transpires in the 19th-century on the American frontier. David and Nathanial live parallel lives and the similarities engender the sense that their histories are connected and their link will soon be revealed. Both are orphans and must free themselves from the imprisoning clutches of malevolent women: the “evil” caretaker, Linda Gates, in David’s case; the “hideous” and “foul-looking” kidnapper, Luna Runaway Witch in Nathanial’s. Both must rescue the imperiled daughters of the women they once loved. Both seek deliverance from soul-wearying solitude.

Lightning’s novel has many moving parts in addition to David and Nathanial’s seesawing storyline: drug dealing and child pornography; murder and spirit possession; family reunions; decimation of a Native American tribe; a haunted forest protected by a man-eating bear. For such commotion to be believable and germane, storytelling must be coherent, consistent, and organized. Otherwise, the action distracts, and pointlessness prevails.

Lightning’s debut ultimately falls short. The author too frequently bungles characters’ names, writes dialogue in all caps, shifts scenes without transitions, and falls into the “telling-not-showing” fiction-writing trap, as in: “Even though it was really late or early in the morning, the place was wide awake.” And by book’s end, David and Nathanial’s connection raises more questions than answers.

Yet, pronouncing it pointless is too heavy a condemnation. The suspenseful fable he aims for can be developed from the novel’s current framework, and with a few exceptions, Lightning’s prose is generally sufficient.

The Runaway Witch and the Laughing Bear’s success exists somewhere in the middle. Further editing for narrative and structure would rout out this nascent debut’s problems and allow it to reach its potential.