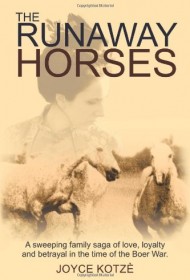 This fine family saga tells of relatives pulled apart by war, of family members forced into combat against each other in a harsh landscape of death and suffering.

In the uneasy calm leading up to the Boer War in South Africa, which straddled the dawn of the 20th century and put the British Empire to the test, the two fictional Henderson brothers travel from England to visit their de Winter cousins in Transvaal. Charles, the elder, falls in love with the country, later earns a medical degree and eventually returns to Africa and throws his lot in with the rebellious Boers. His headstrong brother James, meanwhile, thoroughly debauches himself as he stumbles into a military career in the British Army. Martin, the eldest of the de Winter children, studies law at Cambridge before returning to South Africa and becoming a leader in the coming war against the English.

As fighting nears, complexities flourish. James, who has drunk his way into instability and impregnated another’s wife, marries a woman secretly in love with Martin. Then, as his unit of Hussars is sent into battle, his best friend and fellow soldier becomes infatuated with Martin’s sister, a concert pianist who is not only unhappily married to an agent for English interests, but is also a spy for her brother and the Boer cause.

Unraveling all this takes readers through victories and defeats, much valor on both sides, love, deaths, sexual encounters, courts martial, plots and counter plots, as the cousins struggle, with mixed success, to maintain their ties across the battle lines. The author manages to handle all these intricacies with aplomb and flair, controlling a narrative that, in lesser hands, might easily fly off into chaos.

Instead, The Runaway Horses gives a sharp portrait of a time overshadowed by larger events ahead. More than that, it shows how war can devastate a family, no matter how determined its members are to hold together.