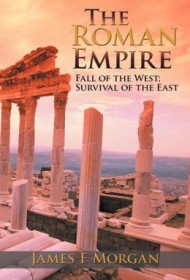 Author James F. Morgan lived for years in Libya, site of ancient Roman ruins, and travelled throughout the Mediterranean world. He wondered how Libya, now mostly desert, could once have been the breadbasket of the Western Roman Empire and why the Eastern part of the Empire, Byzantium, outlasted the West by a thousand years. After decades of research, he found the answers he was looking for.

Morgan’s resulting book furnishes a fascinating journey as he circles the Mediterranean discussing historical developments in the various countries. He focuses on the significance of agricultural changes, rather than military and internal conflicts popular in other analyses, bringing a valuable new dimension to Roman historiography.

As Italy’s soil conditions gradually deteriorated, Morgan writes, the Romans became increasingly dependent on the lands of North Africa for food supplies. But then nomadic peoples—e. g., the Berbers—moved in, and deterioration began there as well. The people didn’t care for the tending and preservation of these fertile lands. In the fifth century B.C., Greek historian Herodotus wrote of Libya’s land: “The soil is black and well watered by springs.” Today, the country is 91% desert.

Following the division of the Empire into West (capital Rome) and East (capital Constantinople) in 395, Rome’s decline came quickly. The last emperor, Romulus Augustus, was deposed in 476. Although the eastern areas saw some deterioration of land, it was not as extensive as in the west. Morgan concludes: “What made the difference between collapse of the west and survival of the east was agriculture . . . their primary source of production, and therefore their primary source of taxes.”

A few typos mar the book (“it’s” instead of “its,” for example), but overall, it is well written, enlightening and well researched (as evidenced by the 150 entries in the bibliography). A bonus for historically minded readers is the brief but valuable summary of each of the Western Roman emperors and his policies.