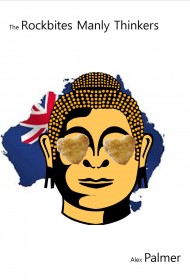 Combining metafiction with workplace comedy is a bold move, but in this spirited comic novel, the author’s choice of depicting a writers’ circle emerging in the bowels of a tiny fast-food restaurant works well, mostly due to an inspired ensemble of characters and an offbeat sense of humor.

The novel’s opening chapter can be offputting, so readers should definitely persevere. Here, readers will find a short story about an Australian secret service officer, “Commander Love,” that rips off Ian Fleming’s James Bond in a poorly written, horribly sexist, and nigh-unreadable way. Far from a deep dive into an unfortunate writing experiment, though, this is a story-within-a-story composed by Bryce Fletcher, the fictional manager of Rockbites, a McDonalds knock-off operating in the touristy beaches of Manly, a suburb of Sydney, Australia.

The novel’s narrator is Gregory Anderson, an aspiring poet and storyteller who has resigned himself to frying chicken nuggets for a living. To stave off boredom, Gregory and his workmates form the titular “Thinkers’ Club” to share their comically ghastly short stories with one another by reading them out loud. Their misfit circle of writers includes the aforementioned Bryce; chubby, moody Twiggy; slumming British academic Godfrey, noble stoner Daniel, known as Gremlin; and a host of other degenerates. These outcasts bicker like siblings, steal like thieves, and carry on in the kind of profane poetry one finds in most working kitchens. Being set in the late 1990s, the story also includes a plethora of drugs, the occasional rave, and even a death by misadventure.

While the literary angle is somewhat of an overreach, the comedic stylings and interplay between characters is a highlight, while the fictional short stories wander into delightfully absurdist territory. The author also throws in some side-splitting asides. Although uneven and somewhat dated, this workplace farce should provide light-hearted fun for readers whose tastes fall somewhere between the full-on lunacy of Christopher Moore and the more nuanced satire of Joshua Ferris.

BlueInk Heads-Up: Readers should be aware that the formatting in this document is composed in a large font that brings the copy in at over 400 pages. Properly formatted, the book would actually be a little over 200 pages.