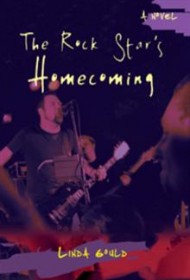 A controversial rock band made up of college alumni returns to Glendary College two years after being expelled. One current student is writing her thesis on the band. Another plans to film the return and mine the controversy for fame. And the band leader’s sister is trying to keep the peace between the musicians, who have been spoiled by success. The Rock Star’s Homecoming pulls all these threads together against a backdrop of 1980s campus life. Sometimes it hits, and sometimes it misses.

Author Linda Gould ambitiously creates a slew of characters and manages to keep them all straight. But Glendary College in the ’80s reads like it’s set in the ’50s, and the conflicts between religious students, jocks and hippies feel forced.

As for the writing, the narrative flows nicely, but the reader could get snagged on stiff dialogue, such as when Sara, sister to rock star Jake and an academic overachiever, tells football star Jim: “I just want you to realize, I’m the opposite of those golden girls you probably prefer – the ones who flit through life on a free pass because of their pretty smiles.” The information packed into the dialogue in much of the book might be better imparted through the actions of the characters; instead, they seem to be lecturing more than the professors.

That said, the romantic entanglements, cliques and complications are well-rendered here, and the idea of a band returning to the scene of its origin after many changes is meaty and adds some flavor to the stew. The Rock Star’s Homecoming is a mixed bag, but some readers will surely click with its look at campus life and love.