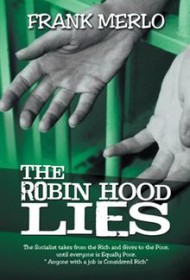 Capitalists are good. Liberal socialists (the words are synonymous) are bad. Abetted by “the liberal media,” they want to take from the rich and give to the poor until everyone is equally poor and “anyone with a job is considered rich.” Such is the worldview of Frank Merlo, a 58-year-old real estate salesman and author of The Robin Hood Lies.

Merlo likes to ask questions – “it’s a good way to get people to like you,” he writes – so the first chapter relates what he learned from inquiring conversations with his capitalism-loving father-in-law. Other chapters feature the stories and lessons of other people he met and talked to about capitalism. His goal is to reveal how they became successful capitalists, and nearly every story ends with an attack on liberals. A story about his neighbors “cheating” to get mortgage relief is an indictment of the “socialist” federal relief program, not of the neighbors, for example.

Merlo shares opinions about policy issues like abortion (“more black women fetuses are aborted than any other group”) and immigration and contraception (referred to as “progressives’ new religion”). He criticizes liberals’ propensity to hide weak arguments behind potshots but takes a few himself: he mentions Ted Kennedy’s drinking or Barney Frank’s homosexuality, for example, whenever possible. To lighten the tone, Merlo makes copious use of exclamation marks and inserts a chapter of anti-Democrat jokes into the middle of the book.

Providing references is for “elites,” Merlo writes, but his nods to Glenn Beck, Rush Limbaugh, Ann Coulter and Fox News tip you off to his primary sources of information. Some might find Merlo’s straight-faced pearls of wisdom amusing (example: “Before you have children it is acceptable to have indiscretions like casual sex, smoke a little pot, or be liberal”), and the overall tenor could appeal to readers on the far right of the political spectrum; others are likely to find much of this unsubstantiated material highly debateable.