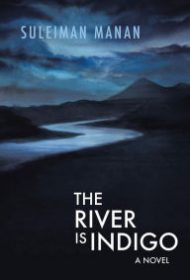 Suleman Manan’s The River Is Indigo is a Dickensian saga touched by Asia’s mysticism.

In the 1930s, Hamzah is born on Java. His Grandma believes Hamzah is a descendant of Sultan Agung, the greatest Mataram king. She tries to control the child’s destiny, believing him rightful heir to the family’s precious estate, Mataram House, but Hamzah’s father spirits Hamzah away, and soon, unpredictable forces begin to batter Hamzeh’s life. He’s separated from his father and eventually winds up in Tobali, an isolated village on eastern Sumatra’s Banka Island, where he endures the cruel WWII occupation of the Japanese. After the war, Hamzah lives with his aunt.

As he grows into adulthood, Hamzah meets Tan, a prosperous Malayan tin miner. Hamzah achieves great success as Tan’s mine manager, but is seduced into a tumultuous love affair with Pinky, a beautiful Chinese woman. Too late, Hamzah discovers Pinky is Tan’s beloved concubine. Shocked, he abandons his job, returns to Banka Island and marries. But this union eventually fractures because Hamzah lacks the courage to reveal his love affair and continued fascination with Pinky. Eventually, the plot widens to include an unacknowledged son, a daughter and troubles with village elders.

A melodramatic aura hovers over the story, amplified because Hamzah blames his ill fortune on a curse related to his abandonment of his heritage. The writing style is near-Victorian, with some unusual syntax choices and overwrought prose, such as, “pulled me into a salubrious peace,” which sometimes slows the pace. Nevertheless, as Hamzah reaches adulthood, Manan finds his rhythm and the momentum picks up, especially as he explores Hamzah’s torn loyalties.

While the story includes some unfamiliar foreign words —samsu, kongsi, abang, sambal, etc.—they can be understood in context. And the author skillfully immerses readers in the story’s exotic atmosphere.

Overall, the unusual settings, from Java to Malaya and elsewhere, and a host of interesting characters create a story that is bound to have broad appeal.