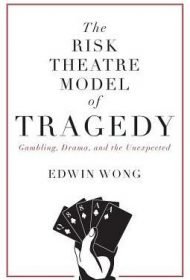 “Tragedy is a tired art,” declares Edwin Wong in his opening sentence, the first of many provocative statements in this bold attempt to create a modern “working model” for an ancient art.

In Wong’s view, what the great ages of tragedy had that modern playwrights lack was a template such as the one provided by Aristotle’s Poetics that showed them how a tragedy was put together and what its purpose was. Without a framework, tragedy descends into empty spectacle or, in Wong’s jaundiced opinion, plays that “do nothing.”

Wong sees the concept of risk as the foundation of a new model for tragedy appropriate to this age of intellectual, economic, and social uncertainty. Tragedy has three essential parts, Wong tells us. First, the hero is tempted with the promise of something he or she desperately wants. Then, he or she must wager something precious to attain the promised prize. Finally, the hero must cast the die, taking the step from which there is no turning back in this risky endeavor. Inevitably, it turns out badly.

Wong elaborates the ways in which playwrights thwart their gifted, intelligent heroes, as well as the variations in structure, pace, and supporting elements possible within his basic framework. He lays out his model with impressive erudition, in the slightly pedantic format common to those with academic training: this is what I’m going to tell you, now I’m telling you, this is what I told you. (Wong holds a master’s degree from Brown University.)

A plethora of rich examples drawn from Sophocles, Shakespeare, Racine, Schiller and many others enliven the overdetermined structure, although Wong’s analysis of them is sometimes wildly off the mark: When he dismisses the hero’s temptation in Othello as unpersuasive because Iago’s motives are unexplained, he seems to imply that Iago is the play’s hero, not the villain.

Despite such flaws, this is a stimulating work that will prompt fruitful discussion among theatre folk.