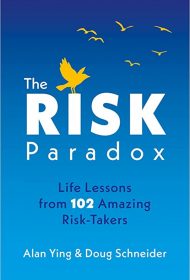 Risk-taking is part of life. Even playing it safe by staying in bed, authors Alan Ying and Doug Schneider note, results in risk – that of muscle atrophy. So, if risks can’t be avoided, when should you take a chance and when should you back away? The authors explore that question through 102 short, risk-taker profiles in The Risk Paradox.

The profiles include recognizable names—documentary filmmaker Ken Burns, U.S. Supreme Court Justice Ruth Bader Ginsburg, inventor Nicola Tesla, among them—along with the lesser known, such as Alton Butler II, who rose from childhood poverty to become a successful businessman. His journey involved risk, but the greatest chance he took was inviting his father, who abused him when he was growing up, to live with him. To his relief, Butler Sr. had mellowed in later life and the two achieved a close, loving relationship.

Butler’s story is among the most dramatic of the 102 outlined, but all the subjects took risks that changed their lives. Ying and Schneider note that transformative opportunities tend to come at “Moments of Truth,” such as losing a job, the death of a close relative or relationship. In those cases, “Taking risks, even if you don’t get the results you want, has a way of leading to more choices and opportunities,” write the authors. They provide useful suggestions on how to approach moments of decision and choose which risks to take.

The profiles are interesting and instructive, taking readers into the minds of risk takers. Unfortunately, the sheer number of them means that they quickly begin to feel repetitious. Their similar formats (“subject was born in X place, grew up doing Y, etc.”) adds to the problem. A more curated collection would have avoided this issue.

Overall, Ying and Schneider have worthwhile things to say about risk. Those interested in the topic could easily skip some of the profiles and glean the same benefit from their offering.