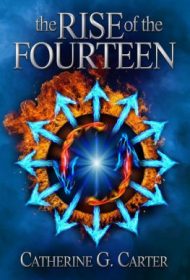 The Rise of the Fourteen is a modern-day mythological fantasy combining epic magic duels with teenage drama.

A pair of sorcerer siblings, Demetri and Sorem, travel the globe to gather 14 teenagers who are also gifted with various magical abilities that haven’t been seen in the world for a long time. The siblings bring the wary teens to their mystical sanctuary for their own protection, where they must train them in their new abilities in order to save the world from a reborn evil— all while dealing with their teenage tantrums.

This book appeals skillfully to its young adult audience through the use of fun, informal language and amusing dialogue, such as one character responding to another’s informed exposition about magic with: “I truly believe that you swallow encyclopedias [sic] in your spare time.”

However, with 14 main characters and the two older mentors, there isn’t much room for each individual to receive significant development. Almost every character is introduced in his/her own chapter. As a result, the novel initially reads more like a highly repetitious anthology than a smoothly flowing story. Just as readers have grown to know and like one protagonist, the narrative switches jarringly to another. To further complicate things, their voices aren’t always distinctive from one another, sometimes making it difficult to tell them apart.

The fantasy elements are varied and interesting, with the teens displaying unusual powers. But each element is introduced to the narrative without much context or time for readers to process it. And the specific evil the teenagers must defeat or what threat it holds is never entirely clear.

Younger readers who can keep track of the over-stuffed cast may find this a fun introduction to the fantasy genre. But veteran fantasy fans are likely to find the plot lacking in the kind of satisfactory character arcs and world building that create a successful read.