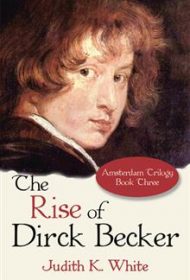 This compelling historical novel concludes Judith K. White’s trilogy about 17th century Amsterdam, then Europe’s most prosperous city and a center of culture.

Dirck Becker is a self-educated young man who flees his impoverished family to learn a trade and find success in Amsterdam. The story follows him as he obsessively searches for a captivating young orphan girl he encountered in his childhood and who now haunts his dreams. As the girl, Nelleke Broekhof, approaches womanhood, she emerges with her own obsession and talent: entomology (the study of insects).

The reader’s interest is drawn early on to what White calls Dirck’s “mystifying, rare, natural gift”— a photographic memory—which plays a central role in his pursuit of Nelleke’s whereabouts. In a series of remarkable coincidences, he discovers that she has landed with a loving, yet traditional family who don’t quite understand her fascination with insects.

By coincidence, the pair also end up on the same ship headed for New Amsterdam (now New York City). As he attempts to court her, he worries about whether his special gift might frighten her away. Or, as White, asks, will he use this remarkable skill to better the world?

After the story piques the reader’s interest in Dirck’s uncommon ability, however, the subject fades into the background as White pursues other storylines. The author disappointingly never answers her own question, even in the epilogue, about whether Dirck used his unique talent in any significant way to better the world. Some readers might be left unsatisfied with an otherwise fine story.

That’s unfortunate, because White’s storytelling is accomplished. Particularly notable are her setups: Her descriptions of characters, clothing, rooms and various settings, down to the contents of the warehouses lining Amsterdam’s canals, are detailed and vivid, adding a sense of presence to the reader’s enjoyment.

Overall, fans of historical fiction who love to immerse themselves in the period will appreciate the effort that went into White’s engaging narrative.